Also known as hazelnut. But I prefer to call it filbert. It’s one of my favourite words. And if I have a cat I would name him/her Filbert.

Anyway, we had lots of filberts around at Christmas time…

And I was given this really nice felting wool as a Christmas gift, in beautiful autumn tones, from this store called Heaven is Handmade (it’s true!). It’s so very soft… I also received another bundle of wool in blue/white tones. I have a plan for it; I’ll show you later :)

Working with felting wool is a luxury for me because wool tends to be more expensive, and I try to keep a tight budget for my crafting habits, so I’m rather thankful for the gift!

So while we waited for the countdown on new year’s eve I thought I would try needle-felting with this wool, and I thought the brown tones would make a good filbert. And so Filbert materialized in the midst of fireworks and glasses of ginger ale. Today he’s having some down time on the windowsill, enjoying a bit of sun. He’s about the same size as a typical filbert.

I think I’m going to try making some animals next. More specifically, a cat. A cat named Filbert.

I once took out this book from the library and it has such lovely photography and excellent instructions for making realistic-looking felted pets. So a trip to the library is in order! 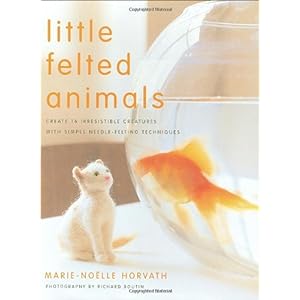