Late­ly I’ve been spend­ing my time on the sub­way play­ing Angry Birds Sea­sons. Mike and I have col­lab­o­ra­tive­ly unlocked all the lev­els on his phone, but when I got my own phone I had to replay all the lev­els again to unlock them, which is fun! :D

If I were an angry bird,Â I think I’d be the blue bird — main­ly because he looks kind of afraid, which is a word that I’ve often heard oth­ers use to describe me as. It’s true that he’s not as strong as oth­ers, but he’s cer­tain­ly help­ful in his own unique ways. 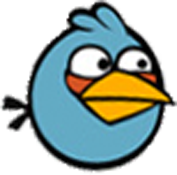 If you were an angry bird, which would you be?

Have a won­der­ful Friday!

4 thoughts on “if you were an angry bird…”