There was this buy one get one free deal for Caron Simply Soft yarn one day at Michaels. I was working on a project that needed dark blue at the time and thought I only needed one skein. So I picked up this fun self-striping fiesta colour for the free skein because I love the neon yellow in it. One of my nieces birthday was coming up soon, so I thought I’d make her a fun vest with it :D (pictured above) The pattern is from issue 88 of Inside Crochet, the Imogen cardigan. I added the arcade stitch to the bottom third of it for more fun :)

And then I ended up needing more of this blue yarn, so I had to get another skein, and had the chance to pick up yet another free skein of fun self-striping yarn!

(One might even suspect that I did this on purpose so I could get more free skeins to grow my stash rather than just getting the 2 skeins of blue that I needed in my first round of shopping. But I promise I really thought I only needed one skein of that blue. Who would want to grow their stash? That’s ridiculous.)

What do I do with this delicious mixed berry colour? Turned out that one of my best friends was visiting from out of town with her most adorable daughter. So I made another vest, plus a matching bias scarf for mum! :D

I used the Chasing Blizzard pattern for the scarf, but only followed it loosely, because my gauge is different. It was a lot of fun to knit. Here I am kind of modelling it so you can see the stitch patterns a bit better.

And the bunny rocking the vest :D It was part of a cardigan pattern from a very old issue of Crochet Today magazine.

She insisted on playing with the rice cooker measuring cups at the juncture of kitchen and dining room. (that was how her mum was able to get a picture of the front of the cardigan)

And spring is the perfect time to go on a knitting/crocheting/yarn crafting adventure! Two years ago I participated in the TTC knitalong, it was a great deal of fun visiting different local yarn shops, meeting other yarn crafters and knitting in public! (you can see my pictures here!). I even got a few exclusive patterns and won a sweater-quantity of handspun from one of the shops!

This year the knitalong is going to be on Saturday July 15! It’s been a hugely popular event that’s entirely run by volunteers, so this year I’m helping to organize the event and we need a few more yarn-loving folks to help out! So if Toronto is your neighbourhood and if you love yarn I think you should absolutely join me :D

It’s really a fantastic event that brings people together, draws business to independent yarn shops and benefits Sistering, a local drop-in and support centre for women. So! The next planning meeting is Saturday May 20 at 1pm, and we can even get ice cream afterwards! :D For more information and updates, check out the event’s Facebook page here.

A couple of weeks ago I completely ran out of knitting and crocheting projects (GASP!) and was feeling antsy watching Netflix without yarn and needles/hook in my hands. I’ve been knitting and crocheting for a while now, (that’s an understatement. It’s been decades.) and while I like simple designs, it may be time to stretch and challenge myself a bit. Also, it might be good to work on a project that takes longer because I’m kind of running out of storage space for new sweaters and cardigans…

So! I’ve been eyeing the Enchanted Mesa sweater for a long time but always thought it’s wayyyy beyond my skill level mainly because it’s knitted in the round. I usually stay away from projects that are knitted in the round. But then Mike pointed out how he doesn’t understand why I say I can’t knit in the round when I can knit almost everything else. It was a question I couldn’t answer. So I thought I must give it a try! So first, the pattern says to do a provisional cast-on. In the round. O_O

So I looked up provisional cast-on, and magic loop, because the circular needle I have is longer than the circumference of the collar. (linked the tutorials I used above in case it’s useful to you too!)

But then the next part of the pattern is knitting short rows back and forth (thank goodness!), and I couldn’t wrap my head around how I could go from magic loop to knitting back and forth. So I decided that I was going to get a shorter circular needle (16″) so I don’t have to do the magic loop. A bit sad that I won’t be using my new skills in this project but at lease I know I can do it!

I should also point out that when I bought the Enchanted Mesa pattern on Ravelry it comes with the Outer Space pattern also, which is a chunky version of Enchanted Mesa. So I’m combining the two patterns a bit, using 1x1 rib for the collar, because I’m using a stiff acrylic (what a lot of my stash yarn consists of, and I wasn’t going to use a nice wool for something I don’t have a lot of confidence making in case I mess up :P) and it just won’t drape nicely if I try to make a cowl collar. I also decided to forgo the provisional cast-on to make everything easier for myself. I made the ribbed collar extra tall so it can be folded down or left up, for an avant garde look, I guess.

I also had to modified the number of cast-on stitches and rows in each section because of the heavier yarn I’m using and I wanted a more fitted sweater than what is shown. The many project pages on Ravelry helped a lot.

Slowly taking shape! So excited about the asymmetrical sections!

Here’s where I’m at currently. Divided for sleeve and placed stitches on waste yarn (another achievement unlocked!) and working on the body. It’s a lot of fun deciding on the next colours as I go. It’s my favourite way to knit I think :)

Will keep you posted on this knitting adventure!

Have a great weekend, everyone! :D This fabulous phases of the moon shirt, on Raegun Ramblings. 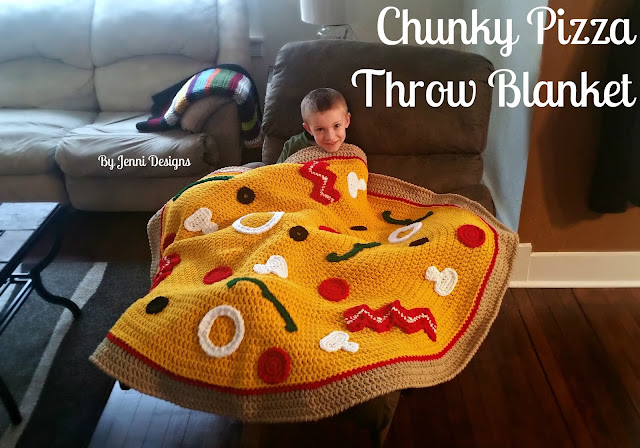 Look at this toasty pizza blanket! From By Jenni Designs. 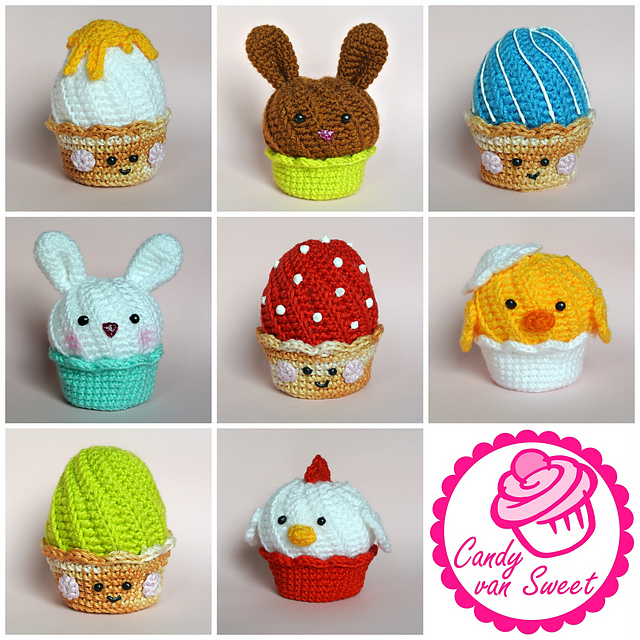 I love the chocolate bunny one. Sweet cupcakes by Candy van Sweet on Ravelry, free patterns! 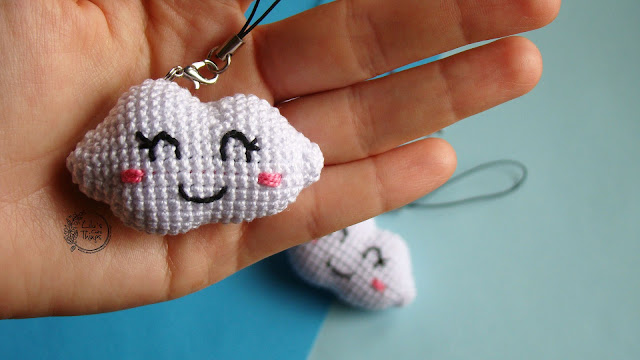 A cool friend pointed me to these lovely clouds ^_^ by Gateand Handmade Crochet.

Another lovely design by Crafty Queen. The granny cardigan just looks so comfy <3 I love negative spaces filled with strings. The tutorial is in French but it’s got wonderful self-explanatory pictures. From Jesus Sauvage. I was tempted to buy the faux succulents while wandering in Michaels one day but didn’t know what to use it for, and now I know! I love that it’s made with an embroidery hoop! Check out the minimalist air plant versions too. I might just make that and will never kill another air plant again. From Delia Creates. These are the most fabulous! Looks like I have to get myself to Old Navy again for more flip flops! Yes I already have an open-toe pair that I have not yet have the chance to wear, but one always needs more than one pair of summer shoes. From Make & Do Crew.