Photos I took in Montreal with the Diana are finally developed :D Here are some of my favourites.

Double exposures sometimes make really fun collages :D Couldn’t quite remember what I took pictures of when I first looked at this… It was from the Biodome, an image of anemone in an open pool, overlapped with an image of Mike in front of tropical plants.

Beautiful streets of Old Montreal on a beautiful day :D We were blessed with really nice weather.

Not sure what my camera did with this image. Somehow most of the colours are stripped away, making the picture look like a horror novel cover :S The actual scene was quite cheerful with these colourful houses! The house between the red and the purple is supposed to be blue.

Chinatown. I really like the depth of field in this one.

I find the Montreal Chinatown a lot cleaner and more picturesque than the one in Toronto.

Inside the Biosphere, which is located on Saint Helen’s Island.

We took a long walk on a tree-lined path on the island along the river.

St. Catherine Street closed off for pedestrians in the summer, with brilliant art installations :D

This one is titled “D pour Democratie”.

We squeezed in a visit to the central library right before catching our train home. The library is accessible through a metro station. I like the solemnness of this photo.

We had leftover film after our trip, so we took our cameras to a couple of historic sites during Doors Open Toronto last weekend. More photos to come!

Hope everyone has a good weekend! :D

We visited Montréal over Victoria Day weekend :D We only brought our phones and film cameras. The majority of pictures are taken on film, and they are being developed as I type! Can’t wait to see them :D But in the meanwhile, here are some highlights from our phones :D

On the first day we went to Biodôme. There were many different creatures to marvel at, but I was most attracted to these sea urchins and anemones. They’re like pompoms :)

In the afternoon we visited Café des Chats, or Cat Cafe, and sat for a while with this fluffy friend while drinking tea and people-watching. We found this cafe by accident; it was across the street from our hotel. Mike and I had some interesting imaginary conversations about how the cats were interviewed to work in the cafe.

“Um, yes. That would be part of the benefit package.”

I’m sure the cafe has a very flexible nap time policy, as most of the cats (I counted 5, others were probably napping elsewhere) we saw were napping. But the ones who were awake seemed to enjoy being petted.

And guess what we found?! A shop devoted to mycology!! :D We also stumbled upon it by accident while finding our way to MEC. Being like a kid in a candy store is an understatement. It has everything — dried mushrooms, mushroom earrings and necklaces, mushroom books, mushroom posters, mushroom condiments, mushroom foraging tools, mushroom growing kits, even mushroom tea! (which has to be simmered for 2 hours — we didn’t buy any, but I’m really curious about how it would taste — maybe more like broth than tea?) I didn’t want to leave, but it was getting awkward how long we were dawdling there in that little shop, so we had to leave :( But I did bring home awesome souvenirs! :D More on that in a minute…

And then! We came across this wonderful cafe called Le K at Square Saint-Louis, which is a lovely park next to our hotel. The cafe operates out of what might have been a storage building for gardening tools and such for the park (?) (Mike said it looks like a mausoleum, but I don’t think that’s what it is). It features large mugs of tea, adorable patio tables and chairs underneath the trees, mason jars of blooming plants, a book cart, a tricycle, and really friendly owners (who offered to take pictures of us together after seeing Mike taking this picture of me :D). Highly recommend a visit if you’re in the neighbourhood :D

And in the last night we were in the city we visited 1.26 by Janet Echelman at Les Jardins Gamelin. It was magnificent. And feels a bit surreal standing underneath it.

As planned we visited more well-known places like the Biosphere, the Museum of Archaeology and History, the Old Port, Chinatown, and St-Viateur Bagel, and (hopefully!) we have good pictures of these on film, but it seems like we had the most fun stumbling across awesome places outside of our plan. And one would probably say that we did a good job finding our hotel with all these fun places around! It’s this hotel if you’re wondering, very friendly, modest size, continental breakfast (which saves quite a bit of money for museum visits!), no complaints :)

And oh! Souvenirs! This one we bought at the most wonderful outdoor market outside Mont Royal station. We carefully packed it so I could carry it in my bag on our journey home (we took the train).

And this from Mycoboutique! :D

More pictures to come soon! Have a good week, everyone!

I made this tonight :)

A rain cloud that seems to be saying, “everything is going to be OK.”

It’s a brooch and it’s going to my friend’s shop :)

Hope everyone has a lovely weekend!

Finally got back the photos taken on the Diana :D These were taken on 200 ISO film, which was cross-processed.

For the cherry blossoms this year I mostly took pictures on the Diana, and a couple on my phone, because I find that in previous years I was taking so many pictures that I forget to enjoy the cherry trees themselves. The one above is my favourite of the cherry blossom photos on film.

This year the cherry trees bloomed during the week, so we had to visit them after work, and it was about 7pm when we got to High Park, the sun was setting, the petals were glowing, it was quite glorious.

Here is the park at dusk, with golden rays of light from the setting sun shining through the branches.

These ones were taken with my phone.

They just make me so happy :)

Earlier in the month we visited the Children’s Animal Farm in Sarnia, Ontario. This photo is my absolute favourite of the roll.

The way the branches are positioned in the goose, the grey-blue tone, the composition — I’m just really happy with the way it turned out.

And here is my favourite smiling animal :D

I think I might print this and put this up in my cubicle at the office :D

And here are some very picturesque views of the farm.

Then one weekend we took a stroll down Queen Street West and ended up in Trinity Bellwoods Park. We got some white squirrel ice cream (white chocolate, craisins and pecans) from the White Squirrel Coffee shop and waited for the resident white squirrel. No luck so far, will try again next time.

But I did find more cherry blossoms! :D

A walk through the park…

Took this while waiting for the streetcar.

And back in my own neighbourhood, with my favourite blooming tree :)

Have a happy weekend, everyone! :D

A few days ago, it was brought to my attention that one of my past posts was problematic. I’ve addressed what happened in the post itself, including taking down much of the content of that post. It can be read there, so I won’t go over the detail again here. But I want to apologize to everyone for not being careful and thorough enough when I wrote the original post. My intention has always been focused on sharing what I know, and sharing it freely. But in this incident the desire to share had precluded thoughts about determining what is or is not mine to share. So I will, from now on, be a lot more careful about finding original sources and acknowledging the hard work that artists/designers/artisans have put into their creations.

So, to end this post, I share with you a very happy spot I visited today, underneath a crab apple tree. I wish I could record the magical fragrance of this tree for you. And here is a view from underneath the canopy.

I’ve just visited the cherry trees at High Park with the Diana this week and dropped off the film for developing today, so there will be more blooming tree photos to come!

Thank you for reading today. I hope everyone has a wonderful week!

The trees are blooming! Came across this tree while exploring some new trails. Looks like a variety of apple.

While visiting family on the weekend, swung by Canatara Park and the Children’s Animal Farm. Took the rest of the pictures on Diana, so we’ll have to wait for the roll to finish and develop to look at pictures of the resident llama and goslings. But here’s a very picturesque view of the farm :)

AND I finished the Cancun boxy lace top!

It was a very fun make, a great pattern to practice different lace stitches. I added a few lace panels to make the top measures approx. 20″ in length. Also noticed that the drop stitch can get pulled out of shape easily if the stitches get caught on something… will just have to be careful when I wear it. Really happy with how it turns out! Love the drape of it, and the yarn is wonderful to knit with. I love the gradual variegation and the purple tone in the darker shade. Last time I mentioned that I bought the yarn for the Convergence top, so now I have a skein and a bit left, because knitting uses up way less yarn than crocheting. Hmm. What to make, what to make… 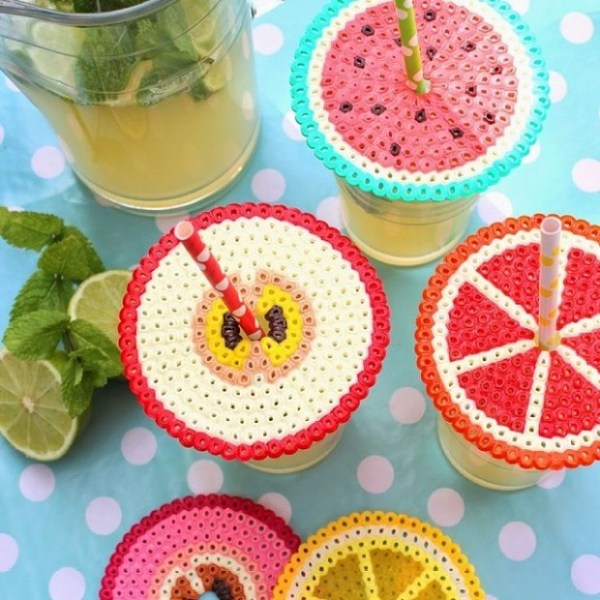 These ginkgo earrings are so very beautiful. Hard to believe they’re made with shrink plastic! From Wellnesting.

Must try this next time I get a bouquet :D Frozen flower photo tutorial spotted on Photojojo. Simple and fun clothespin puppets, with printable templates! Might give this a try one day with the nieces, nephews and friends :) From Delia Creates. 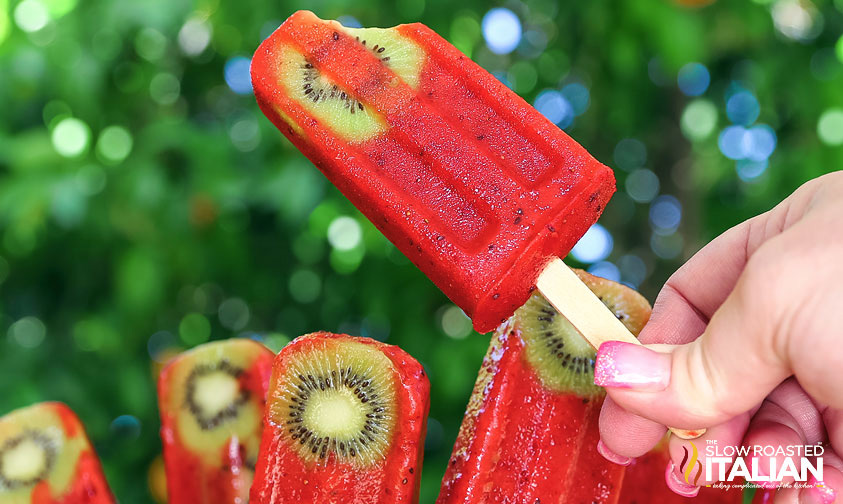 Recipes for these strawberry kiwi and other fruity ice pops on The Slow Roasted Italian :D

Have a wonderful week, everyone! :D